A standard component of almost every CNC machine in almost every shop is the AIR GUN. They exist in a variety of forms and power ranges … but are the tool of choice for cleaning chips off workpieces and areas of the machine itself. Fast and easy to access … easy to configure and expand.

But are there any serious drawbacks to the use of the air gun at the machine?

As a former CNC field service technician … I can emphatically state YES !! I would say that the air hose and air gun are one of the leading causes of major CNC component failures such as backlash and ball screw replacement as well as other axis positioning inaccuracies caused by machine way failures due to scoring. The innocent act of blowing off those chips can actually be one of the more destructive acts a machine operator can do to the machine. Why?? Here’s a brief run down of some of the more common problems … as experienced first hand from my experiences “in the trenches”.

Of all the damage I have witnessed due directly to air gun use … the need for the replacement of the axis ball screw assembly is by far the most common. Now for the most part I’m not talking about simply blowing off the chips at the end of the machining operation … I am primarily talking deep-cleaning the machine. Cleaning the machine and machine table table during a change over … cleaning the chuck getting ready to install the collet assembly … the “before the weekend” type cleaning of the machine where the operator may be charged with cleaning the machine from the weeks activities and is using the air gun extensively to gather the chips and “deep-clean” the machine. This type of extensive chip blowing will inevitably lead to the chips being blown into areas not designed to handle them. Perhaps the chips build up in a corner … out of sight … or under a way cover or find their way into a telescoping way cover. Looks clean … but these chips are hiding and waiting. As new machining starts … the motion of the machine forces the chips deeper and deeper into those areas until eventually they find their way onto the ballscrew where they “work their black magic”. The wiper systems for both the machine ways and the ballscrew assemblies are not designed to stop chips being forced in under pressure from the force of an air gun … but rather are designed to be effective in conjunction with the water flow of the coolant. What starts out as some axis backlash will some worsen and eventually will require the replacement of the ballscrew assembly.

In conjunction with the destruction mentioned above … a different scenario occurs when the chips get lodged between the way covers and the machine ways. As the axis moves … the chips dig and score the ways of the machine. What starts out as some simple score marks are soon magnified as more chips and more metal shavings lodge in those scores and they deepen and worsen and so on and so on and so on … until the damage is extensive. This type of damage is a much harder to remedy … the ways of the machine cannot simply be replaced. Now the repair consists of re-scraping or re-grinding the ways … a major machine rebuild … or replace the machine tool completely.

Over the years I have witnessed many other component failures that I would attribute directly to the use … or over use … of the air gun by the machine operator. These range from electrical components where chips were blown into cabinets or through seams of cabinets … CNC lathe turret issues because chips had found their way into the indexing mechanism … and ATC issues where chips were interfering with the tool change mechanisms. In short … excessive use of the air gun and blowing of the chips inside the machine enclosure is very destructive … and expensive !!

The fact that blowing chips is a destructive act … doesn’t help with the everyday need in the machine shop and at the machine to clear away and deal with the metal chip issue. But I can definitively state that COOLANT and WATER FLOW is a much better alternative. One easy way to eliminate the overuse of air pressure is to provide an alternative like the following. 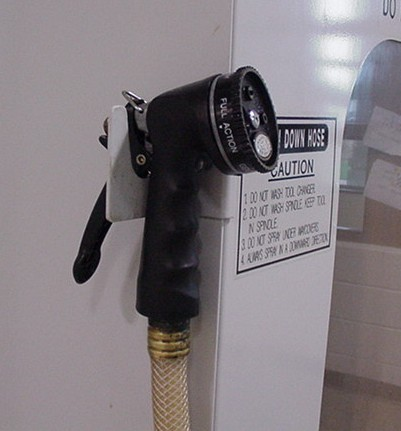 Create a coolant hose line by installing a T-joint right after the coolant pump. Attach a standard garden hose to the T and run the hose to the front of the machine. Install a standard garden spray nozzle at the end. Now when the coolant pump is on … the operator will have pressure and in essence a garden hose with coolant flowing at his station. Instead of using the air gun in all instances … he now has the option of using the coolant as a cleaning medium. The water flow is a much better and safer alternative to the high pressure air gun. BUT NOW IT’S UP TO ALL TO INSURE THE COOLANT MIXTURE IS MAINTAINED. With a healthy coolant mixture … another benefit is the application of oil to the areas where the coolant is sprayed. Instead of leaving behind metals chips and shavings … the spray will leave behind a coating of beneficial lubricating oil.

The flow and lesser pressure of the coolant hose provide a much safer and still as efficient chip removal alternative.

Blowing chips seems like such a simple act … and one that is so common at the machine. But given a more in-depth look … one can certainly see the possible destructive side effects this simple act can have on the machine tool. If you are in a production environment … no doubt you have even experienced these destructive end results first hand.

I hope this glimpse into the “real world” can start you and your shop thinking in the direction of utilizing coolant and coolant spray as a chip cleaning alternative. Your machine tool will thank you !!

Kipware® software is one of the fastest growing brands in machine shops around the world because it solves REAL WORLD problems.

CAD/CAM is ONLY ONE option for CNC programming.

Let ALL your CNC’s operate seamlessly.